Predatory bots don’t play fair. Attacks are so common, an ecommerce site might be hit with two or more kinds of attacks simultaneously. Avenue Stores, a fashion category leader, with a website that serves millions of customers each year, was hit with massive account takeover (ATO) attacks by an Eastern European crime ring that used credentials of real customers to break into accounts and and buy merchandise.

The cybercriminals switched to using ATO to purchase e-giftcards fraudulently. When defenses such as a Web Application Firewall (WAF) proved ineffective, Avenue Stores subscribed to PerimeterX’ Bot Defender. Learn how the retailer not only stopped the ATO and card fraud, but also uncovered - and blocked - Web Scraping which had gone undetected before. This case study shows how a retailer crushed a flood of simultaneous attacks, and future-proofed its infrastructure against new kinds of bot intrusions. 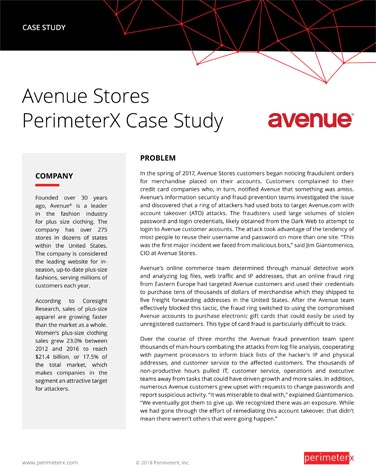