In this post I will share the process we went through at PerimeterX while searching for ways to speed up our main application deployment, with no downtime.

Our environment is based, in large part, on Docker containers. We have a dynamic number of front-end CoreOS machines; each includes an HAProxy container and a few instances of our main application. Every application instance is a Docker container as well. Just for easy reference in this blog, let’s call these containers pxApp_1, pxApp_2, etc. We are using HAProxy to balance the requests between our pxApp containers and to manage and offload SSL termination. 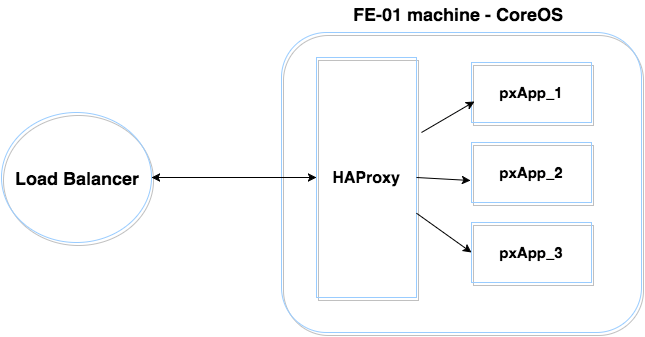 Our first deployment solution was simply an Ansible playbook which replaced the old pxApp services with a new version. That solution was written for a very small environment without strict SLA requirements.

The front-end playbook contains our basic roles: common, pxApp and HAproxy. The pxApp role deployed the requested image version that we built and pushed to GCR (Google Container Registry) using a Jenkins job that executed right before the Ansible deployment. HAProxy was configured by an Ansible Jinja2 template to match the deployed pxApps.

As our service grew and scaled up, we had to improve this rollout method to be:

So we started to search for a better solution that would fit our new requirements.

The first method we tried:

This entire process can run in parallel on some of the machines using predefined percentages. 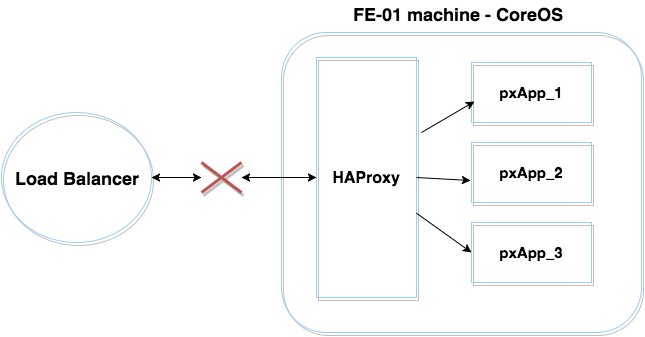 Relying on the gcloud API to remove and add machines back to the GLB turned out to be a slow process which also had a high degree of variability, taking anywhere from a few seconds to as long as minutes.

Next, we tried the Blue-Green deployment method, creating three new pxApp containers to replace the existing three, and then carried out the switch from the former to the latter.

As a first step, we configured six backend servers in the HAProxy - three active and three inactive servers. We followed this sequence:

Then we repeated that sequence with pxApp_5 ↔ pxApp_2 and pxApp_6 ↔ pxApp_3, and deployed the new version to each FE machine. 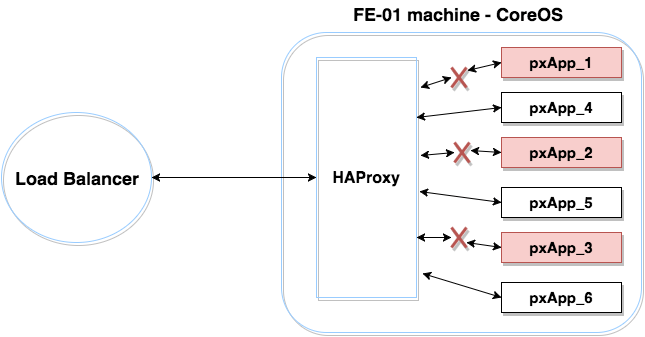 We encountered the following problems with this solution:

We experimented with a few other methods, before finding the combination of HAProxy Unix Socket commands and Ansible Rolling update that was the most successful for us.

Thus, we arrived at the solution that we ultimately adopted:

Split the FE machines into three groups, using property “serial: 35%” - the ansible rolling update batch size. As a result, the ansible-playbook will run on three groups, one by one. Let’s call them Group A, Group B and Group C. For each group we created an Ansible batch consisting of three application containers (acting in parallel on all FE machines in the group). When deploying the first pxApp container on all machines in group A, the following steps are carried out in order: 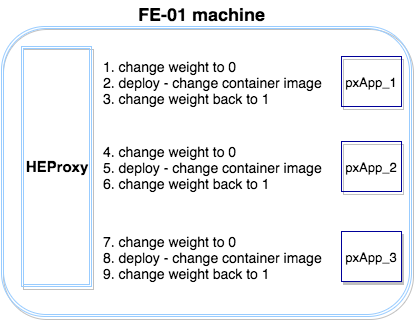 Once those three steps are completed for pxApp_1 on all machines in group A, take pxApp_2 through the same sequence, and then do the same with pxApp_3. That sequence takes care of the FE machines of group A. Note that during this process at each given time, at most 1/9 of the containers are down, allowing smooth operation of the service.

Thanks to Ansible parallelism and HAProxy fast socket API, we reduced the deployment time of our biggest app dramatically – by up to 70% in some cases – without increasing wasted resources. An additional important benefit: there is no traffic loss during the deployment.

This method, which became our standard deployment in our Docker-based environment, avoids downtime and is also much faster and more efficient than the methods we used before. We already have plans for future improvements to further boost speed and scalability, using tools like packer and docker datacenter.