Our previous blog post, Client-Side battle against JavaScript attacks, and Why SRE’s should worry more about third-party javascript, shed light on the growing digital skimming menace.

Digital skimming is a semi-new threat, often called “Magecart,” consists of more than a dozen “official” different rival groups. These groups are targeting online retailers and eluding security researchers. Interestingly enough these groups don't always play nice with each other. They compete with each other to steal “low hanging” credit card data and personally identifiable information (PII). And resell them on deep-web and dark-net markets. This client-side threat is the new face of modern e-commerce cybercrimes.

Skimming Definition: Skimming or card skimming was originally used to describe the physical tampering of POS (point-of-sale) devices, ATMs and gas pumps by placing a hidden device inside them to steal credit card information. The stolen credit card information is used to make online (card-not-present) purchases, cloned for in-store (card present) purchases or sold on different deep-web markets and darknet markets. Victims of credit card skimming were often unaware of the theft until they noticed unauthorized charges on their account.

What is digital skimming or online card skimming

The evolution of skimming

Later on, cybercriminals started to practice the same concept of card skimming - online. Instead of placing a physical device on the ATM, they would place a code that acts the same way (scanning private information) in online stores. There are more than a few synonyms for this semi-new cybercrime trend of digital skimming: js sniffing, digital skimming, web-skimming, and js stealer. They all refer to the same practice of injecting an unwanted piece of javascript malware into website cart or checkout page code to ‘grab’ sensitive information.

What does a digital or online card skimming code look like

Below is a skimming script example taken from Github that resembles pieces of code that were used to carry out real sniffing operations.

Code taken from Github that was used to carry out real sniffing operations.

Skimming scripts usually come heavily obfuscated, some are very short and have less than 20 lines of ‘innocent’ JavaScript code and one line that contains the malicious behavior. In the example above, we can see that the attackers are leveraging legitimate jQuery.

How does digital or online card skimming work

Most of the skimming operations are carried out in two ways:

Moreover, while press releases and news tend to focus on operations against known brands and websites there are ongoing attacks carried out widely targeting CMS-based websites. The impact of these attacks should not be taken lightly. For instance, less than a year ago around 17 vulnerable Magento extensions were leveraged by skimmers to launch wide skimming attacks using POI (PHP object Sterilization) vulnerability in several popular Magento extensions. Over 7,000 Magento shops were reported as compromised during 2018 alone. In most cases, the infection was as simple as a single line of HTML that loads a malicious script used to carry out the attack methodically on thousands of website without much effort.

Although site owners have been notified by good samaritans security researchers that the C&C servers were a sinkhole, hundreds of website still have the malicious snippet embedded in their source code while the malware itself does not exist anymore. It remains from a past breach. Magento Commerce, Powerfront CMS, and OpenCart-based website are under constant attack in a new era of digital skimming and there’s not a proper solution as of today. Magento shop breaches are losing their attention to more ‘appealing’ campaigns, involving compromises of larger brands such as Techrabbit, VisionDirect and many more.

Digital skimming is on an upward trend. This new fraud trend does not seem to be fading out, with new breaches, new actors and hundreds of thousands of victims. According to Gemini Advisory’s research, fraud involving physical cards (CP: card-present) is on a downward trend while online (CNP: card-not-present - skimmed digitally) is rising. 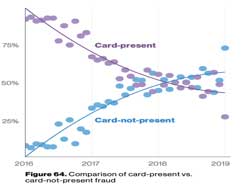 These trends correlate perfectly with similar findings by 2019 Verizon data breach report that clearly shows the rise in new web skimming trend. In their words exactly, “Web application attacks have punched the time clock and relieved POS Intrusion of their duties.“

How to protect against digital or online card skimming?

Even though the digital skimming threat is constantly evolving, attackers always stay busy finding new ways to infect websites and exfiltrate sensitive data. There are relatively simple countermeasures that can be taken in order to protect against the threat of online card skimming.

Stay tuned for more blogs on the topic of third-party code vulnerabilities. Find out more about protecting against digital skimming attacks with PerimeterX code defender.